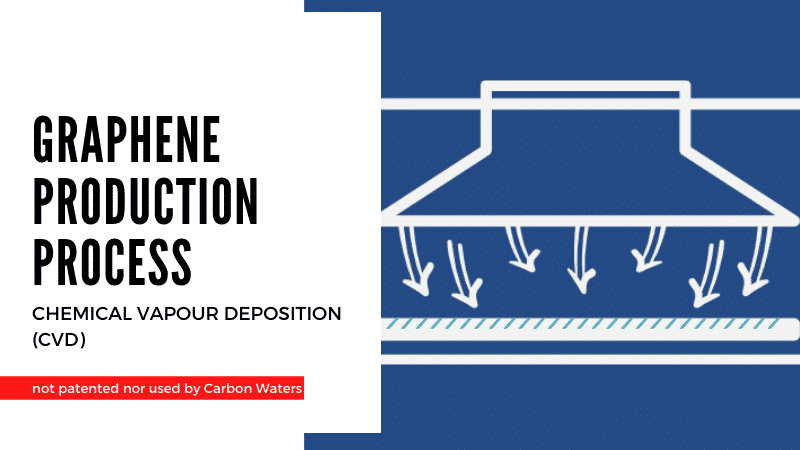 Chemical Vapor Deposition, or CVD, is the only bottom-up production method for graphene that is used in an industrial environment. Here, carbon-containing gases are placed in contact with a metal surface under high temperatures (1000°C) and high pressure.

Subsequently, the graphene honeycomb structure is formed on the metal substrate, which serves as a catalyst.

Even though the quality of the graphene produced this way is high, being mostly SLG graphene with very few functional groups or defects, this production method has major drawbacks.

Firstly, current industrial technology is still limited in the size of the graphene surface produced. Secondly, the graphene obtained needs to be transferred from the metal surface to the target substrate.

This top-down approach to obtain graphene in dispersion from graphite is mastered by Carbon Waters.

This exfoliation method was described in 2008 to answer the needs for a scalable production method.

For this exfoliation method, graphite is commonly oxidized under harsh conditions to make graphene.

We use cookies on our website to give you the most relevant experience by remembering your preferences and repeat visits. By clicking “Accept”, you consent to the use of ALL the cookies.
Cookie settingsACCEPT
Manage consent

This website uses cookies to improve your experience while you navigate through the website. Out of these, the cookies that are categorized as necessary are stored on your browser as they are essential for the working of basic functionalities of the website. We also use third-party cookies that help us analyze and understand how you use this website. These cookies will be stored in your browser only with your consent. You also have the option to opt-out of these cookies. But opting out of some of these cookies may affect your browsing experience.
Necessary Always Enabled

Any cookies that may not be particularly necessary for the website to function and is used specifically to collect user personal data via analytics, ads, other embedded contents are termed as non-necessary cookies. It is mandatory to procure user consent prior to running these cookies on your website.